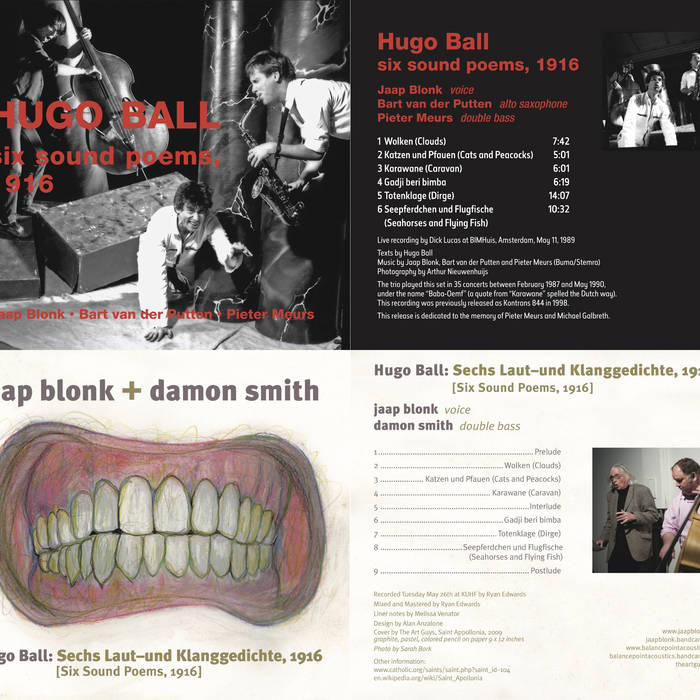 
The Life and Work of Hugo Ball.

This recording is a modern interpretation of sound poems written and performed by German Dadaist Hugo Ball more than a century ago. Those familiar with Ball know him as the author of these innovative works and founder of the Cabaret Voltaire, Dada’s Zurich birthplace. Despite the sound poems’ artistic legacy, they constitute only a small part of Ball’s creative output. The purpose of these liner notes, then, is to consider the complex life and work of the man behind the sound poems.

Ball was born in western Germany at the end of the nineteenth century to a large Catholic family with ties to the region’s leather industry. His parents pushed him to learn a useful trade, but Ball identified as an artist. He studied literature and philosophy at university before leaving to learn acting. Germany’s thriving experimental theater community was his creative home from 1911 to 1915.

Ball excelled as a dramaturge, championing new repertoire, promoting local actors, and writing influential essays on modern theater. World War I interrupted his collaboration with Vassily Kandinsky on what they called the New Theater, one “bursting at once in dance, color, mime, music, and word.” (Ball, “Das Münchner Künstlertheater,”1914) It would be a Gesamtkunstwerk for the twentieth century, a vision Ball later realized at the Cabaret Voltaire.

Ball’s initial response to the war was one of enthusiastic support. He volunteered for military service but failed his medical exam. Refusing to accept defeat, he traveled to the front on his own. What he saw there turned him against the war. He wrote scathing articles and forged papers to help men evade the draft. Facing arrest, he crossed into neutral Switzerland in 1915 on his own forged documents.

There, Ball’s immigration status forced him to work odd jobs, including as a vaudeville pianist. This inspired him to explore the cabaret as a site for his politically engaged New Theater. He opened the Cabaret Voltaire in February 1916, and it quickly attracted a core group of artists. Only five months later, Ball ended the experiment. The nightly performances exhausted him, and he resented others’ efforts to institutionalize Dada. After a period of recuperation, he returned briefly to organize a series of soirées but soon abandoned Dada, poetry, and theater for good.

After Dada, Ball reinvented himself as a writer. He began as a political reporter—something of a return to his antiwar days. This journalism coalesced as a book, Critique of the German Intelligentsia, in which Ball charted the development of German militarism from the Protestant Reformation to the future coming of a reactionary dictator. He also wrote two novels with Dada-esque characters and plots.

From his earliest years, Ball’s single-minded dedication to his art approached a secular monasticism. In 1920, disillusioned with his youthful values and current events, he returned to Catholicism and committed himself to the study of early Christian theology. As part of this rebirth, he expunged his diaries of sacrilegious content, erasing every trace of the younger man. Ironically, this coincided with a revival of popular interest in Ball’s Dada works.

If not for his death in 1927 at the age of forty-one, he might have reconciled his artistic, political, and theological interests; as it was, he remained an outsider for much of his career. He used his marginal status to explore innovative ideas unrestricted by normative mainstream society. In our increasingly homogeneous world, Ball’s resistance to dominant narratives offers an inspiring model for creative thinkers of the twenty-first century.