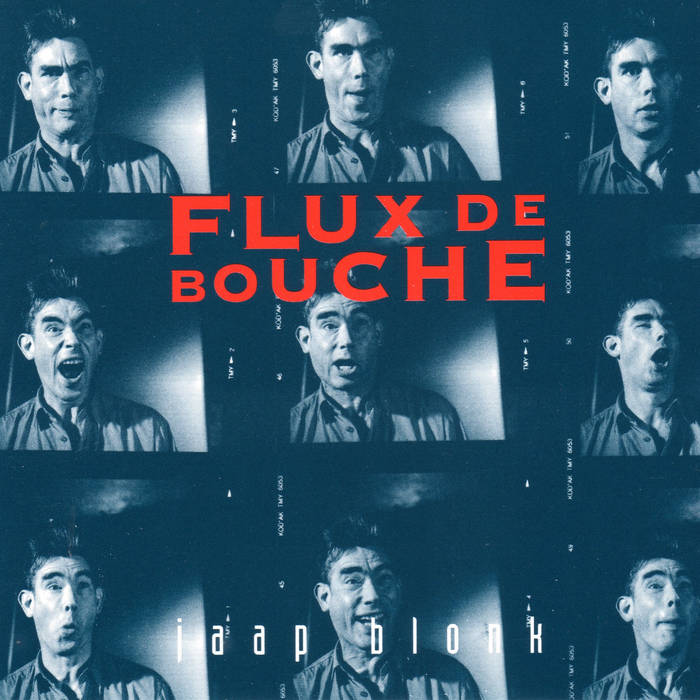 Recorded and Edited by Abma Geluidstechniek, Amsterdam, October-December 1992
Produced by Jaap Blonk
Cover Photographs by Arthur Nieuwenhuijs
Design by Yvonne Willems
Released as Staalplaat STCD046 in 1993.
Gone out of print in 2010.

Sound poetry comes alive only when you hear it. Though possibly the oldest form of oral poetry, ii is still a relatively unknown genre. Covering a wide area between ordinary speech and singing, it can take many shapes: poems in fantasy languages, text written in self-invented symbols, or voice sounds that cannot be notated at all. Good sound poetry is very direct communication, the human voice speaking out immediately, not bothering about meanings. The imagination of the listener is allowed to wander freely, without being directed by words (of course I also recorded some pieces to contradict this statement!).

Apart from a few isolated examples, the history of published sound poetry begins with Dada. One of its founders, Hugo Ball, wrote a cycle of six sound poems in 1916, which he read in ihe famous Cabaret Voltaire In Zurich. I recorded ihe 3rd, “Totenklage” (Dirge) and the 6th, “Seepferdchen und Flugfische” (Sea-horses and Flying Fishes). The latter was the very first sound poem I ever recited, back in 1977; I still love to improvise on it.
Like Ball, Rudolf Blümner (though not a Dadaist) was searching for a new language, pure and absolute, untouched by the clichés of everyday speech and ‘journalism’. “Ango laïna”, from 1921, is his only surviving poem.
Tristan Tzara's “(brüllt)”, meaning (roar) as well as (scream), is the most extreme Dada text I know. The concluding sentence says 'who still finds himself a very nice person’.

Of the three American texts from the 70s, “glasslass” by Dick Higgins and “DINA SORE” by Robert Wilson read like a kind of 'minimal poetry'. I tried to find intimate, yet intense voice qualities for them. In the Wilson piece I took the liberty to repeat the main strophe several times more than in the printed original.
In “Axtherastical” Guy de Cointet invented a very convincing language of his own.

Of my own pieces, the two versions of “der minister” could be called concrete poetry. Their game is played with the phrase ‘the minister regrets utterances of this kind’.
In November 1991 I taped a short improvisation and transcribed it with greal care. A year later I recited this notation; this produced “just a thought”. “Popocatepetl” is a puppets’ dance on a diminished version of this Mexican volcano.
“Darg” is made up of fragments of village names from Drenthe, for centuries Holland's most backward province, inhabited by farmers using their words sparingly. It has a lovely countryside.
Then there are my first two Phonetic Studies. Nr. 1, “Rhotic”, investigates the R. Nr. 2, “Frictional” manipulates the so-called ‘voiceless fricatives'. “Mnemosyne”, the Mother of the Muses, is teeming with little overtones.
Finally, “Flux-de-Bouche” is a more or less random fragment of the flow my mouth at times cannot help uttering.

I wish to say thanks to my friends, especially Lilian van Bennekom and Bart van der Putten, for their positive criticism and support in realizing this project.